Back to "Cartoons" Main Page

History of Mighty Mouse:  Did you know Mighty Mouse was the original "Super Fly"?  No, he didn't have a long coat and a pimp cane.  At Terrytoons studios in the early 1940s a man named Isadore Klein came up with a character spoof of "Superman" involving a fly in a Superman-style costume.  Paul Terry, head of Terrytoons, liked the basic idea, but thought the character would be cuter as a mouse.  I mean, come on, a fly isn't that endearing!  Thank goodness Paul had business sense. So the character "Super Mouse" was born in 1942.  A few cartoons were made with the mouse in Superman tights until a near disaster struck.  A disgruntled ex-Terrytoons employee took the idea of Super Mouse to a comic book company and got published.  To avoid any association with this other Super Mouse, Paul Terry had the name of his creation changed to "Mighty Mouse" from there on out.  In fact, the few cartoons where he was known as Super Mouse, the narrative was dubbed over to say "Mighty Mouse".  Eventually, to avoid all association with Superman or Super Mouse, Mighty Mouse's blue and red tights were changed to his unique costume of yellow and red (which we all know today!).


The Evolution of Mighty Mouse


Mighty Mouse changed his appearance several times before finding his definitive "look".  Take a look at how Mighty Mouse evolved from his first cartoon appearance to how we know him to look today. 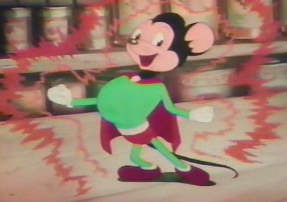 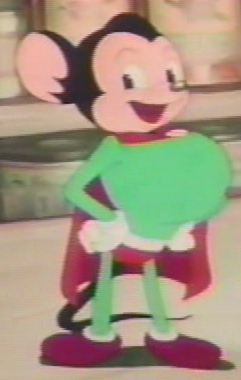 Mighty Mouse in his first cartoon ever, "The Mouse of Tomorrow".  At the time of its original release (1942) the character was called Super Mouse.  Starting in 1944 the earlier cartoons all renamed the character Mighty Mouse.  But despite the obvious parody of Superman, Mighty Mouse's costume colors are green with red cape, trunk, and boots.  His nose is red, instead of black like we know him today.  Also, his build is rather unimpressive.  Notice how skinny his arms and legs look.  Not to mention that his legs are much longer here than in his most popular look. 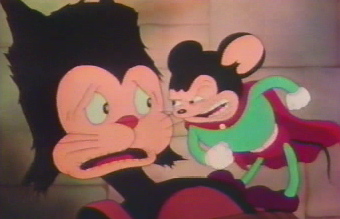 He kept his look in his second cartoon "Frankenstein's Cat" (1942). 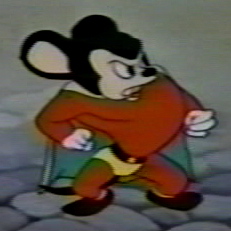 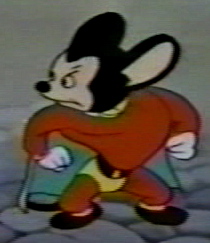 Here Mighty Mouse is looking more like we know him in "The Green Line" (1944), but something just doesn't ring true.  It's his costume colors!  Here his suit is red with yellow cape and trunks.  Later, the colors would be reversed.  Also worth mention is the fact that Mighty's boots are black here.  In his established look, his boots are red.  It's great to see Mighty Mouse have some bulk to him.  His nose is black, too.

The Many Origins of Mighty Mouse


It was fairly common for the writers of Mighty Mouse to change things about his back story often, since these were just short cartoons mainly composed of sight gags.  Just what do we know about Mighty Mouse?     In his first cartoon, "The Mouse of Tomorrow" (1942), Mighty Mouse is an ordinary mouse who gets his super powers from eating foods at the super market.  Later, in the cartoon "He Dood it Again" (1943), they still stick to this story, saying that Mighty Mouse (Super Mouse) lives in the super market.     But supermarkets do get boring, and in "Pandora's Box" (1943) he was given another origin.  As the ordinary boyfriend mouse of Pandora "long, long, ago", he takes vitamins A, B, C, D, E, and XYZ to become Mighty Mouse (Super Mouse).     Most of the time, Mighty Mouse's origin is ignored.  But one recurring element is where and what time period Mighty Mouse lives.  Unless we're told otherwise, we're supposed to assume that Mighty Mouse is fighting evil in present-day America.  But in some cartoons we're told the story takes place "long ago" in some undeterminable time period in some place of western civilization such as a big city, a little town or a quaint little forest.  "The Pirates" (1945) is unique, because Mighty Mouse lives in the jungle like a Tarzan-styled adventurer.  Later in "Bad Bill Bunion" (1945) Mighty Mouse is in the Old West.  The funny thing about this is when Bad Bill Bunion reprises his role in "The Jailbreak" (1946), him and Mighty are in present-day.  In fact, in the latter cartoon, Bad Bill is pursued by the U.S. Army, Navy, and Air Force, but it is Mighty Mouse who captures him!  "Krakatoa" (1945) finds Mighty Mouse in a tropical locale.     MORE TO COME!