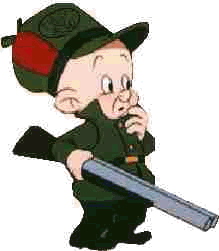 History of Elmer Fudd:  Elmer Fudd started out skinny in cartoons, like we all know him today, was then made to look incredibly fat in cartoons for about a year, then was changed back to his skinny self again.  Why did the short-lived change in Elmer Fudd take place?  Director Bob Clampett was taking over the Bugs Bunny cartoons in 1941 (after Tex Avery left for MGM) of which Elmer was the foil.  The character of Bugs Bunny would have diminished had Clampett and other folks at Warner not seen something special in him, and at the time it seemed funny that Bugs would match wits with a fat, lispy hunter.  Clampett and his team of animators decided to change the look of Elmer just to experiment and to make him look more like the voice actor for Elmer, Arthur Q. Bryan.  After about a year's worth of cartoons, the Warner Bros. animators (including Clampett) did not care for Elmer's new dimensions and decided to change him back to normal.  Elmer just looked too weird and it wasn't as easy to make an extremely fat character physically funny like the fast-paced antics of Bugs Bunny demands. 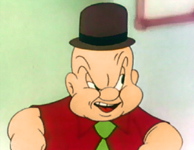 Arthur Q. Bryan was the original voice of Elmer Fudd, not Mel Blanc.  He actually looked like the fat version of Fudd!  Bryan did Elmer Fudd from the very beginning in 1940 to his death in 1959.  The last actual cartoon that featured Bryan as Fudd was released in 1960 called "Person to Bunny".  Then Mel took over as Elmer for a little while, but couldn't capture the same sound as Bryan.  When Bryan was doing the voice of Elmer, Mel did add in certain sound effects for Elmer.  Sadly, though, the use of Elmer Fudd in theatrical cartoons greatly diminished after Bryan's death.

Here is a filmography of the fat Elmer Fudd's cartoon appearances:


The next cartoon in which Elmer Fudd would return to his normal, svelt self would be "The Hare-Brained Hypnotist" on October 31, 1942 as directed by Isadore "Friz" Freleng.  Thank God for Friz Freleng!  I'm a great fan of director Bob Clampett, but you have to admit that not everything he did was gold.  The fat Elmer Fudd is just one of those boners.  With this Friz Freleng Fudd cartoon, and the following Chuck Jones directed "To Duck or not to Duck" cartoon released on March 6, 1943, it was established that a skinnier Fudd was funnier because he could get more physical (as witnessed in the boxing match with Daffy Duck).  Bob Clampett returned as director with the skinny Fudd in a small role in the terribly bad musical cartoon, "A Corny Concerto" on September 18, 1943.  Clampett redeemed himself, however, with the next Fudd cartoon called "An Itch in Time" released on December 4, 1943.  This cartoon starred the "real" Fudd, his funny dog, and a wonderfully funny southern flea!  Bob did good again in the next cartoon "The Old Grey Hare" on October 28, 1944, but thereafter only directed cartoons with Elmer Fudd on rare occasions.      Directorial duties of Elmer Fudd were then left up to such talents as Frank Tashlin, Friz Freleng, Chuck Jones, Robert McKimson, and Arthur Davis.  The next Bob Clampett Fudd cartoon from October 5, 1946 called "The Big Snooze" was another incredibly awful cartoon with Elmer Fudd in a nightmare sequence.  Other directors, outside of Bob Clampett, really fleshed out Elmer's character.  Out of all the animation directors mentioned here, Robert McKimson and Chuck Jones were the best for Elmer Fudd.  McKimson started out with "Easter Yeggs" on June 28, 1947 and carried through occasionally throughout the 1950s.  Jones did the Bugs Bunny/Elmer Fudd cartoons for the most part. The late 1940s-1950s cartoons with Elmer Fudd are the best.  He's slow-witted and physically very funny.  Being skinnier allows for a lot more flexibility than when you're roly-poly...even in cartoons.  Personality-wise, Elmer Fudd never changed since 1940 thanks to the skillful voice talent of Arthur Q. Bryan.  But it wasn't until the later 1940s throughout 1960 that Elmer Fudd was at his very best!
Quick Facts: